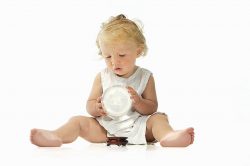 ave you noticed the new breed of children arriving on the planet lately? Do you know, or do you have a child who is particularly sensitive and intuitive? Do you know of babies that seem to be “old souls”? These children will look you in the eye and see straight through you. You can’t hide anything from them.

They are loving and forgiving and have a special connection with nature. They may have an affinity with plants and animals or be concerned about the environment from a surprisingly young age. Some have a natural ability to heal using energy or find lost items. Doreen Virtue, Author and Angel Intuitive calls them “Crystal Children” since they also have an intuitive understanding and attraction to crystals.

Their predecessors “Indigo Children” were born between 1978 and 1992. Indigos were more rebellious and likely to be diagnosed with ADHD. Both Indigo and Crystal Children can be quite psychic and even see Angels or Fairies.

One young child I know insisted that his mother needed a particular crystal. She laughed when she read that it was helpful for pregnancy. A couple of weeks later she discovered to her surprise that she was actually pregnant. Her four-year-old son knew before she did!

When my own daughter was in early primary school she could see coloured lights around people and enjoyed watching the different colours blend and move during assembly. Unfortunately, she somehow learned that it wasn’t normal and that she should have actually been listening to the Principal instead of being off with the fairies, and so she lost her ability to see auras.

10 Tips to Nurture your Child’s Abilities

Of course, life is not always easy for these children who can be particularly sensitive and don’t cope well with overstimulation.  They can be sensitive to sounds, touch, smells, tastes and foods, chemicals and allergens in our environment.  Our Kinesiologist, Carolyn Beesey,  believes that these sensitive children don’t have the filters in place to protect them from the energies around them including other people’s energy.

They can also be particularly sensitive to touch and may find tags on clothing irritating or the texture of foods unpleasant.

Some children (not just psychic children) put themselves on what we refer to as the “white diet”  and will only eat white foods like bread, pasta and milk. Things that are easy to eat.

Carolyn is currently offering a fabulous program for these sensitive children.  You can find out more HERE

That’s all for now. Have a fabulous week,